I recently picked up a Dell PowerEdge 2400. I’ve only ever used HP servers since starting my IT career back in 2002 and as this server was cheap and local-ish, I wanted to pick it up for a look-see. My main interest in grabbing this server is because it has dual Pentium IIIs so if anything, the rest of the server could be scrapped and the PIIIs sold on for more than I paid for the server - £10. 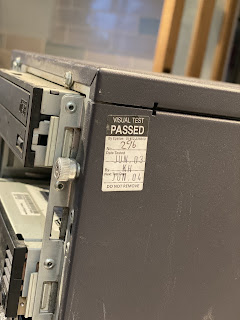 Its original manufacturing date is August 2nd, 2001 or February 8th, 2001 depending on which is the correct way to interpret the date! Either way, it’s 20 years old this year, 2021.

A quick look inside shows an unhealthy layer of dust but more importantly, a totally dead Renata battery which was showing signs of swelling so this was promptly replaced with an IKEA branded replacement. Don't hate me, they are cheap and quite fine to put in machines like this where you're not relying on them as your daily driver. 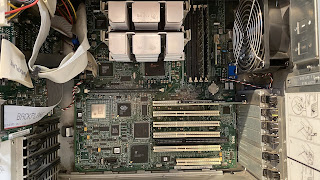 The system didn’t come with any drives but I had two Ultra 320 80-pin SCSI drives from an old HP server which fit but my understanding would run at half their optimum speed because the Dell expects the older 160 drives to be mounted instead. I have 4 the possible 6 drive brackets but not the screws so for now, they are in there but loose. Screws have been ordered.

Upon first boot, a number of warnings appear about a lack of system settings and unset time. They appeared before and after the battery was replaced. 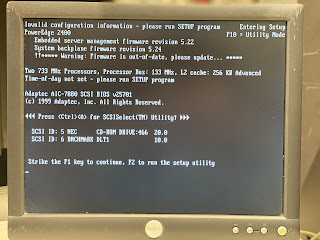 F2 was dutifully pressed and the current date and time was set after being defaulted to midnight on October 1st, 2000.  I also set the fan speed to half to quieten down the machine somewhat. 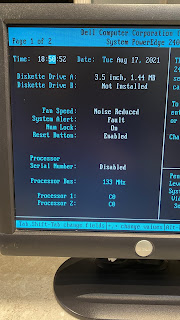 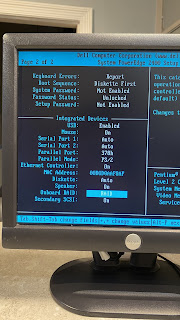 On the second page of options, I set the onboard RAID mode to RAID. With a dead battery, the BIOS reset this value to Off even though the option says that SCSI mode is the default. The BIOS is out of date so this might be fixed in the latest version. More on that later.

These are all the setting changes I think I need at this stage so I moved on to formatting the hard drives but before I could do that, drives must be configured in the RAID. Pressing escape on the keyboard saved the changes and rebooted the server.

After the reboot, pressing the appropriate key combination when prompted let me go in to the configuration screen for the RAID controller.

The two drives needed initialising before they could be added to an array. The drives had previously been wiped with DBAN 1.0.7 whilst this server was set in SCSI mode so DBAN could access them as two individual drives. DBAN 1.0.7 I believe is also the last version to support these older SCSI controllers whilst still being small enough to fit on a single floppy. I don't have any blank CDs at hand and my "burnt" copy of a newer DBAN is on a DVD which this machine cannot read.

Once they had been initialised in the Controller Configuration Utility, they were able to be selected to be added to a new array. I opted for RAID 1 seeing as I only have two drives at present. 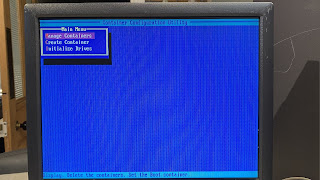 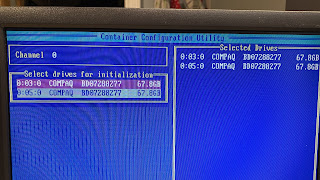 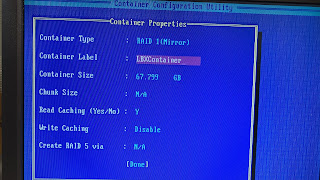 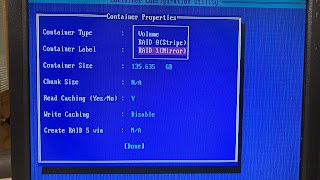 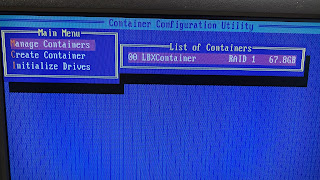 It gave me some warnings that the container couldn’t be used until the drives had been scrubbed. I’m not sure and I’m only guessing here but it looks like it is doing a low level format or at least a write all 0s operation seeing as it is taking forever. 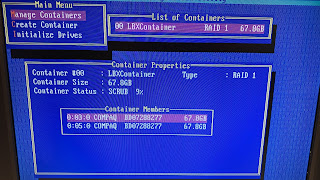 After what felt like an eternity, about 2 hours, the drives were scrubbed. I thought it would be time to install an operating system.

To wind back a little bit, prior to rebuilding the array and whilst the controller was set to SCSI mode instead of RAID mode in the BIOS, I installed Windows Server 2003 on one of the drives. I'll note here that USB devices such as keyboard and a thumb drive was not working properly (foreshadowing...?).

I understand from reading elsewhere however, that to correctly install Windows Server 2003 you are required to update the server's BIOS to a newer version than is currently installed.

The BIOS is currently version A06 and in A07, there was a fix made to the USB from sharing its IRQ with PCI devices - I wonder if this will fix the issue I noticed when plugging USB thumb drives and keyboards in?

The A09 version BIOS is the latest from May 2003 and the download is still available on Dell's website. As such, the self-extracting ZIP version was downloaded and the tool run on my Windows 10 laptop with a USB floppy drive connected to create the bootable floppy image containing the update. Launching the exe installer from within Windows 10 needs compatibility mode for Windows XP to be used however it does then show the A09 version "[a]dded support for Microsoft(R) Windows(R) Server 2003 operating system". Obviously this BIOS update would fail when run not on the server itself from within its own Windows operating system. 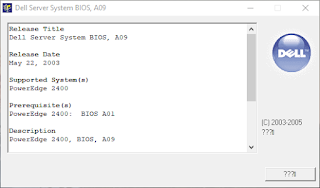 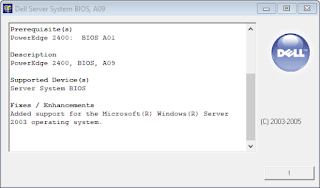 The self-extracting floppy disk executable was used to create the bootable floppy containing the BIOS update.

The disk was inserted in to the server and it was rebooted to start the BIOS update. 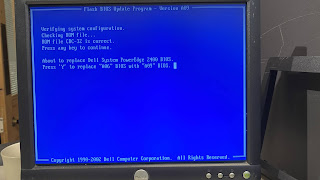 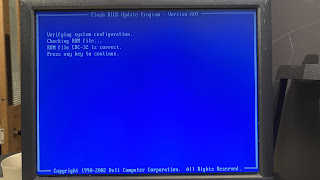 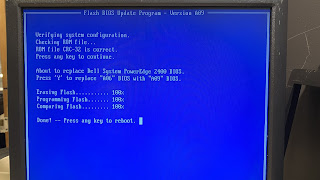 Following the prompts through got the BIOS updated from A06 to A09 and the server restarted.

Am I finally able to correctly install Windows Server 2003 on the RAID? Well, sort of. Out of the box, the text-mode (the MS-DOS-like part of setup) needs to be fed drivers for the RAID controller. I downloaded the ZIP file of the drivers and extracted them to a blank formatted floppy disk. The file is called w2k3-2806085.exe.

The Windows Server 2003 install was instructed to load the drivers from this disk and then setup continued as normal with the RAID being formatted with NTFS (quick) along the way. 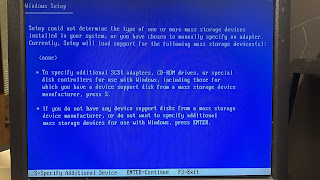 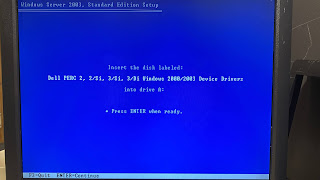 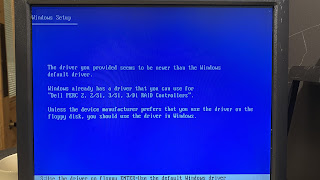 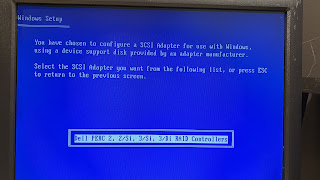 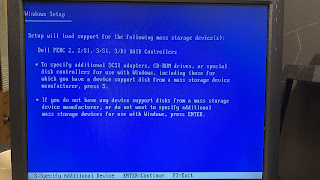 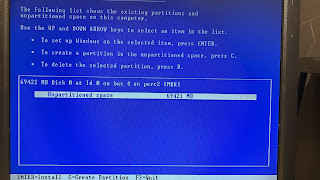 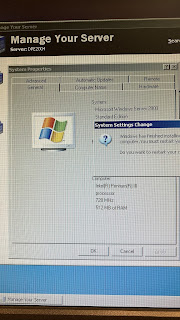 Now that Windows Server 2003 is basically installed, join me in the next part where I run the firmware updates for hardware from the Dell PowerEdge Service and Diagnostic Utilities 4.3. 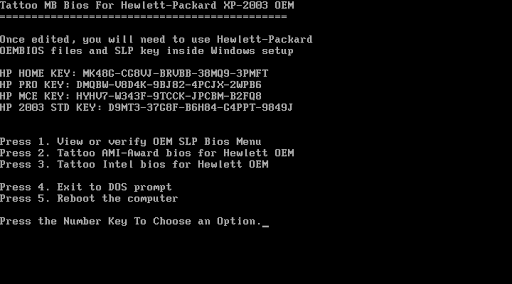 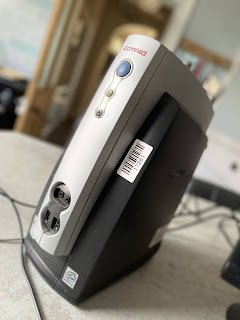 A recent pickup from eBay is a Compaq iPAQ Desktop 2.0. It's specifications as it came to me are as follows: Intel Pentium III running at 866 MHz 128 MB PC-133 SD-RAM Seagate ST310211A 10 GB hard drive Onboard Intel PRO/100 VM ethernet Onboard Compaq/ADI SoundMax Integrated Digital Audio Onboard Intel 3D Direct Graphics (Intel 815/815e Chipset Graphics) Despite being "legacy-free", it was fitted with the optional "backpack" which gives you PS/2 keyboard and mouse, serial and printer connectors. This PC did not come with any of the possible expansion options and instead sports a blanking plate only. I am lead to believe that CD-R and LS-120 drives were made available and some of the similar period Armada and Evo laptops from Compaq have compatible drivers so I am on the lookout for one of those for a reasonable price. It was listed on eBay and bought as "for parts" or "spares or repairs" as the PC only booted to a Windows 2000 Professional lo 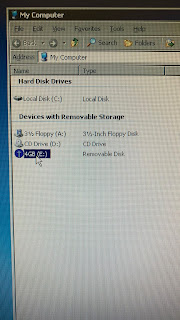 This is a continuation from Part 1 where in summary, I configured the BIOS from scratch, set up RAID 1 array from two hard drives and installed Windows Server 2003. Good news! Windows Server 2003 is correctly installed and comes with drivers out of the box for all the hardware currently installed. However, Dell provided a CD called  Dell PowerEdge Service and Diagnostic Utilities 4.3  which I guess it the Dell equivalent to the HP Support Pack for ProLiant (SPP) which is what I more used to using to update the firmware and drivers. As before, I don't have any blank CDs to write the ISO. Instead, I have dumped the contents to a USB drive, which incidentally is now working (along with USB keyboards) since the BIOS update to version A09. I also found that I might need the DELL OpenManage Server Assistant to install some other bits and bobs so I will take a look at that after. The Dell forums give a link to their FTP and the filename required -  om34_win_managed_system